And also, I hate to admit, I didn’t think much about it because it hadn’t affected me. But that all changed at the beginning of December 2015, when my husband and I were standing in the bathroom together, doing…what? Brushing our teeth? Putting on deodorant? Maybe trimming nose hairs…that would have been me, actually. Thanks menopause! I don’t know what we were doing. He lifted up his T-shirt and said, “What do you think that is?” and pointed to something just under the far right side of his breast.

It was a growth: red, flat, maybe the size of a Loonie and starting to pucker.

“What do you think that is?” Such a simple little question, expressed without a hint of worry or concern, as if he’d just opened the fridge, grabbed a Tupperware container filled with ancient mystery contents, turned to me and said “What do you think that is?” the way he had probably hundreds of times, thanks to my poor fridge management skills. And yet that innocuous, mundane bathroom moment was the precise second a tectonic plate shifted underneath our feet. How we didn’t feel the ground shake just then I don’t know. But our world had changed. Roughly 5 weeks after that he was diagnosed with breast cancer. And fifteen months after that, he was gone.

First I need to tell you something about, I’ll call him ‘Bob’, because, well, that was his name. I know when most men get this type of diagnosis, the usual assumption is he’s probably that typical guy that just would not go to the doctor. But that wasn’t Bob. He would visit the doctor for the slightest thing. He was infamous for getting the weirdest ailments. We had names for them. There was his Exploding Toe. Then Popeye Elbow. The famous Fat Lip. But the king of them all was RED PATCH!

This was a rash that would start out the size of a dime on one thigh, expand slowly until it covered most of the upper limb, then mysteriously vanish and shortly after start on the other thigh, then one shin, then the other, and so on and so on for years. When he went to the dermatologist, and the doctor asked him what was the problem, he said “I’ve got this red patch.” Doc scraped a bit off, looked at it under the microscope, then turned to him and with a very experty tone said “Mr. Robertson, you have what we call…RED PATCH. Try this cream.” I used to joke that somewhere around the age of 90, it would be RED PATCH that would finally take him down.

So he was not someone who didn’t pay attention to his body. And if he had some complaint he would take whatever was recommended to eliminate it right away. Our bathroom cabinet was like a drug store; pain relievers, allergy pills, stomach remedies (may have been my cooking) and creams for everything from crusty to oozing.

Bob also took more vitamins and supplements than any human on the planet. Religiously…by the bucket load. What was the reason for taking many of these pills? Prevent cancer! Obviously he missed one…Eye of Newt perhaps? So I’m not sure how this got by him, other than that he was also susceptible to sebaceous cysts, those annoying benign lumps of fat that a lot of us get, many times on our scalps, but he had grown one probably 20 years before in just about the same spot that the evil stuff had taken root, on the left side. He told me that’s what he thought it was when he first noticed it, therefore no alarm bells went off.

And so we embarked on the journey to rid him of this invader. March 2016 was radiation. May was mastectomy. It was in a few nodes. Then a nodal dissection in June. At least one more lymph node had cancer cells. Crap. July he started chemotherapy. I’m pretty sure the GP Oncologist said that because he was such a strong, robust and youthful 70 year old (bucket loads of supplements?) they were going to hit him hard. That’s how serious it was. We were given the rundown of possible side affects, but we took for granted none of that was going to happen to him. 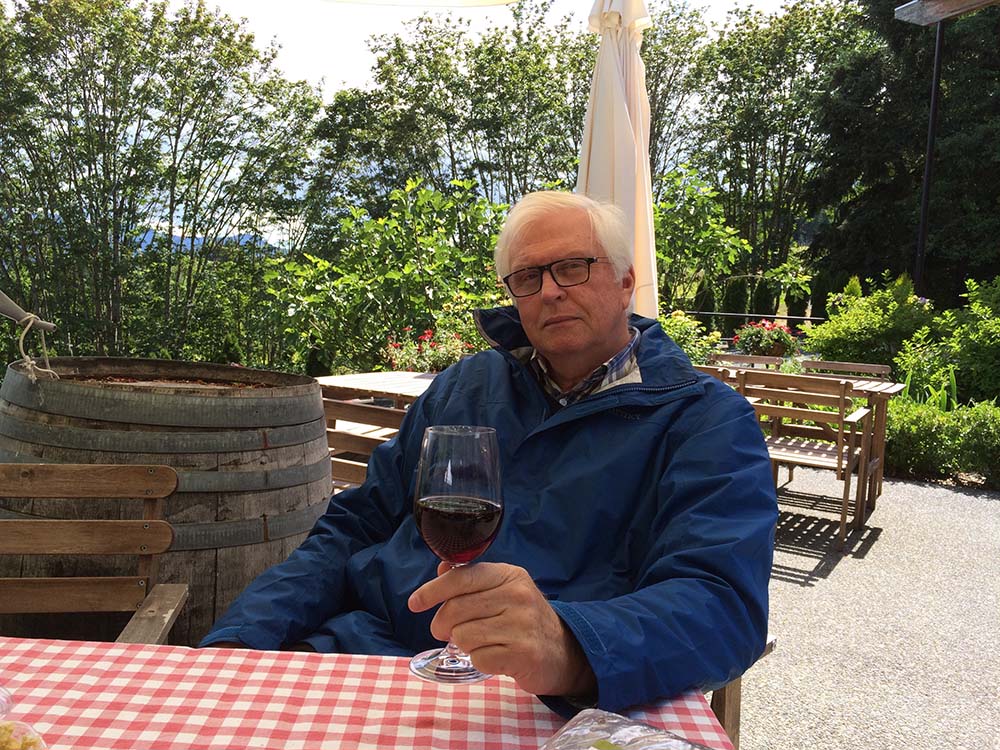 Just before chemo started. Any wine tasting day is a good day.

And this is where I have struggled with whether to tell you this story, because I realize that chemo has saved and is currently saving countless lives. But I also know that some don’t survive the ‘cure’, and Bob is on that list. Once he began his treatments it seems pretty much everything that could go wrong, did. I won’t go through the lengthy list, because Christmas is coming and you’ve got shopping to do. I will tell you that at one point, when he was in crisis and I was trying to figure out how to prevent him from expiring from dehydration or starvation, I saw the chemo as some alien monster that was destroying Bob and it spoke in a language that I didn’t understand, but I felt like I should be able to interpret its bizarre space-like screams and six scaly flapping tentacles and figure out what the hell it was actually saying and then I would fix it. But I couldn’t.

Bob was removed early from his first chemo treatments because of damaging and possibly irreversible side affects, and put on a second kind of chemo, which was supposed to have fewer side affects. However, it did have an extremely rare but fairly serious risk of inflammation in the lungs. I can’t remember if the doctor mentioned that one, but even if she had, we would have thought ‘That won’t be Bob!’ But it was. Not Red Patch, but equally weird and completely destructive.

And also, of course I wish there was no cancer. I wish Bob had never had to go through everything he did. I think it would be awesome if chemo was never needed ever again. And although there are so many who have made it through to the other side and have enjoyed more life, I have also seen, as I’m sure you have, people who have suffered from the disease or the treatment.

So I guess my point is, if you can do anything to possibly prevent getting cancer so you’re not facing the risk of chemo, do it! If that’s not your jam, well then just keep an eye on any annoying lumps (I’m not talking about the one in the La-Z-Boy) or any changes in your body that just don’t seem right. Whether you’re a man or a woman, be aware.

Thanks for reading. Now I’ll get back to trying to find shoes for my frighteningly huge feet. 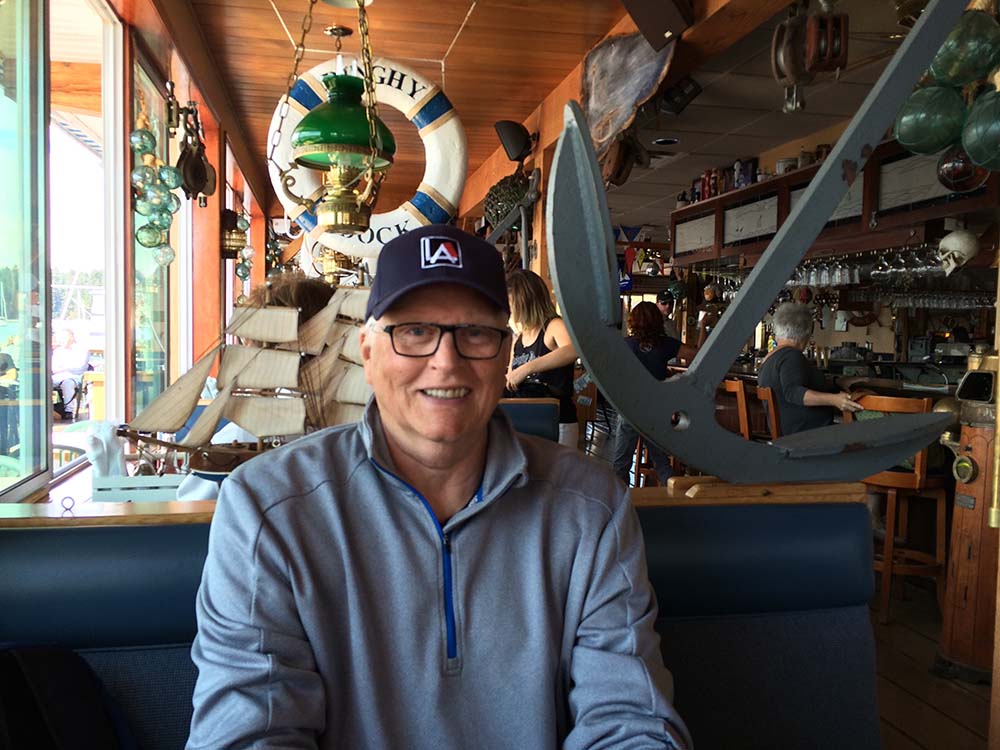 After treatments began, but before things went bad. How I like to remember him.