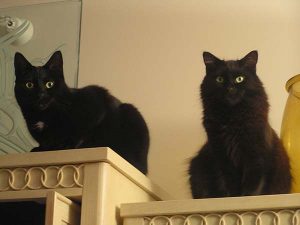 It’s March 2020 and the planet is trying to come to grips with Covid-19. We’re all a bit, if not a lot, shaky, worried and somewhat insecure about our future, so I thought I should write about something a little cheerier…GRIEF! What? I know, you’re saying, ‘Linda, grief isn’t a cheery topic. Why not go back to your usual claptrap, like your Most Requested Hand-Fart Tunes, or your bottomless pit of hilarious stories about your cats peeing on everything?!’ That’s a good question, and don’t worry, I will get to those cat peeing stories in the near future! But here’s the answer; on March 19, 2017 my husband died. When I look at the calendar, I can’t believe that three years have passed so quickly and yet at the same time I’ve felt every second of every one of those days slowly tick away. At the beginning I thought I would write regularly about my grieving experience, it seemed like the Social Media thing to do, and find comfort in the Hive, but I very quickly realized that I wasn’t capable. However now, on this anniversary of his absence, I feel ready to share some of my experiences. Most everyone lives with grief, and so this may all seem like well-worn territory, with nothing new to offer, plus I can’t guarantee I have any real insight, so if you want to just pass on this and wait for the hand-farts, I get it.

Here’s some of my experience. In the first hours and days after Bob died, it literally felt at times that the ground was falling away from me, and I’d reach out to grab on to something to prevent myself from plummeting into whatever otherworldly abyss was opening beneath me. That subsided fairly quickly and then it shifted to something else that I can only describe this way; I felt like I was 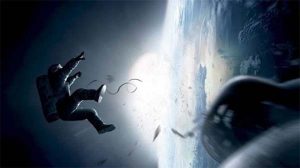 Sandra Bullock, but not Sandra Bullock in say, Miss Congeniality, where she was funny, but tough, or The Blind Side where she was funny, but tough and loving, but Sandra Bullock in Gravity, where she’s sometimes funny but mostly terrified because she’s spinning out of control in space, and there’s no George Clooney to save her! That uncontrollable spinning sensation lasted much longer than I would have liked. I had immense difficulty focusing on anything. There were dozens of panicky thoughts whirring through my head at any given moment. I felt incredibly vulnerable, and was almost certain that I was going to fall victim to some scam that would relieve me of all my money. Or I’d be totally incapable of preventing some band of gypsies from moving into my house, who would take all my money and I’d never be able to get rid of them or their organ-grinding monkey! Oh sure, my Mother would probably have grown fond of the monkey, but that’s not the point. Of course, in the movie, Sandra Bullock saved herself. That little detail is not lost on me.

Somewhere in early November of that first year, the spinning subsided only to be replaced by something much darker and infinitely more difficult. I can’t tell you exactly what it was, but I thought I was losing my mind. After a few weeks of that torture I headed off to a grief counselor, who was, as I’m sure all grief counselors are, a caring, calming and understanding presence. But I still struggled with whatever it was that had gripped my mind. And then somewhere in January, as I was sitting at the kitchen table eating dinner with my Mom, suddenly it just lifted off of me. I hadn’t really done anything, except perhaps eat a lot more pasta and chocolate, plus just hanging on for a few months by my fingernails, but it was like some heavy creature had crawled into my skull a few months before for a nap, and for whatever reason on that, probably, rainy January day, while my Mother and I watched Pat and Vanna, it evaporated. And what an indescribable relief that was. That didn’t mean grieving was over, and I’m not gonna lie, there have been a number of deep dark valleys since, but not nearly as threatening as that one.

The week after he died, my best friend came to stay with me for a while, brought food, which was immensely helpful and kind. I was lucky to have many loving friends to help me. I called them all my Personal Floatation Devices. When she was leaving, I took her to the ferry, as I lived on Vancouver Island at the time, and after she went through to the boat, I got back in my car, and first just had to sob for a few minutes. And then suddenly I remembered the date and realized I had forgotten to pay the car insurance!…by 12 days! It had expired a few days before he died, and I had driven around Nanaimo for all that time with no one noticing. If the police had pulled me over, they would have had an emotional mess on their hands, so they dodged a bullet there. Suddenly I was frantic, and panicked. I wiped my face, turned on the car, and as I put it into gear, I noticed the digital display on the dash that tells you if the phone is connected, or you need to change the oil, was flickering back and forth between Bob’s iPhone and Consumption. It had never done that before and I thought Oh GREAT! Bob’s communicating with me and he’s ticked off because I’ve forgotten to get the insurance done. I was completely freaked out! I drove to the insurance office so carefully, because I thought if ever there was a time I might drive over someone, this is it. Luckily I got there without killing anyone, ugly cried at the insurance desk, and got out of there. That digital display has never flickered like that again.

Initially I was worried I wouldn’t dream about him. But I did. One of the most memorable went like this; He and I were on a floatplane, and I think we were flying out of Nanaimo to Vancouver. He loved floatplanes. We made a stop in, maybe, Sechelt. In a blink I’m off the plane because I have a bag with a loaf of bread in it, and I need to find out what the tax is on bread, because I’m like that. As I’m walking up the dock, the plane leaves, without me! Now I’m in a panic, and I’m trying to figure out how to get to where it’s going, but I’m stuck. I believe the message in that dream was pretty clear…this was a journey I couldn’t take with Bob…and I have a problem with sales tax.

There are several common similarities in the dreams I’ve had. First, he’s always healthy, always smiling his big-Bob-smile. He never speaks, although I wish he would and tell me where the all the GOLD is hidden. In most dreams, he is usually behind a window, where he’s looking for me, and I frantically yell at him trying to get his attention, which proves unsuccessful. Those dreams really cripple me. If he really is trying to communicate with me, someone on the other side needs to give him a key to a door, or remind him just how soundproof double-glazing is!! 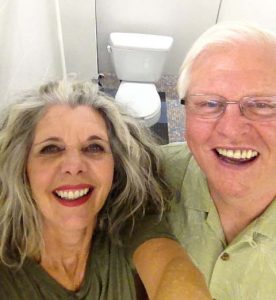 So I can’t tell you all the stories from these last three years, not in one blog. Have I become more comfortable with grief? Well, sort of. I spend time with friends and family, and make sure I don’t become isolated, except for now, when we are supposed to be isolated. I’m trying to get my exercise. I was hoping that my grief would manifest itself as an inability to eat, just enough to lose about 15 pounds, but sadly that didn’t happen. I feel the pain of loss isn’t sitting right on top of my skin anymore, where the slightest touch or wisp of a breeze would break me down. Have I done anything specific to make this happen? Well, I have gone for professional help. I’ve had a few glasses of wine here and there…okay, more than a few some times, and those are stories for another day. I’ve read books. I’ve talked to lots of people. I have laughed a lot. But I think probably the biggest ingredient is simply that I have continued putting one foot in front of the other.

However I will tell you where I have struggled a bit.

My husband was the living embodiment of the Boy Scout motto- Always Be Prepared (I may have already told you about the many earthquake kits he had in our home and cars)! So it’s not surprising that several years before this crisis hit, he made us head to the lawyer to get our Living Will/Representation Agreements done. We didn’t really talk about this in detail, we simply read through the boilerplate documents, and signed them. I was absolutely certain we would never need them. And then we did. I was responsible for making the decision to take the person I loved most in the world off a machine that was keeping him alive. There’s no question that at that time, I knew it was the right course to take. And on the day, I read the document to the doctor, and he confirmed that there was no other road to explore. But because of who I am, in the intervening weeks and months, I have wrestled with doubt. Was it really the right decision? Did I miss something? Should I have waited a bit longer? Full disclosure, if I think about it long enough, I can pretty much make myself believe I was responsible for the Titanic sinking, so, there’s that! But here’s a little story that I try to remember when I’m wrestling with my betraying brain: 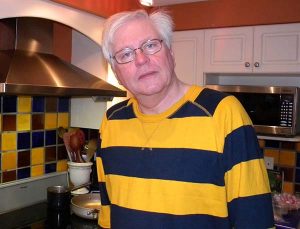 What became known as The Bumblebee Shirt

Sometime in the summer after Bob died, I was coming back home from a walk, and as I was turning into my cul-de-sac, passing a couple of cedars hiding an electrical box, I heard a loud buzzing. It was so loud it stopped me in my tracks, so I turned to see where this was coming from. Down on the ground, amidst dried and brown cedar boughs, was a big beautiful bumblebee, and it was caught in a thick and sticky web of some kind and was dragging the remnants of this behind it. There was no way he could detach himself from it. He was trapped, and would no doubt die from exhaustion. So I grabbed a twig and pulled the web that was so stubbornly adhered to the bee’s lovely fuzzy body. It took a few seconds, but it finally let go…he wasn’t anchored to the earth any more…sweet release…he flew away.