A few mornings back, after I had pulled myself up and out of bed and checked my phone, I saw there was an email from my sister-in-law.  The first words my blurry half-cemented-shut eyes registered were ‘I’m thinking about you.’ She’s thinking about me! Oh no!  That can’t be good!  Suddenly I’m consumed with frantic questions. Why is she thinking about me?  What day is it?  What have I forgotten?  Where am I supposed to be?  Why am I wearing these Buzz Lightyear pyjamas?  What is the meaning of life?  Who put the RAM in the Ramalamadingdong?  None of these questions would be answered until I was hooked up to my IV drip coffee.  OK.  Clarity, of a sort.

I read her email and it turns out she was thinking about me because it had been a year since my Mother had died, and she is a lovely person.  My sister-in-law has the uncanny ability to remember dates, all dates, even the most obscure.  ‘Hi, just calling to say it’s been exactly a year since you had that moustache waxed.  Thought you’d probably want to know!’  It’s her SuperPower.  And as I’m sure you know by now, my only SuperPower is the ability to eat one donut after another without ever feeling full.

Thanks to this long distance mental nudge, I wondered how I could mark the date, other than just thinking about the time passing, and possibly becoming melancholy at being the only one left in my particular family.  There were only three of us to begin with, but, still and all, I’m a 61 year old orphan!  So I decided that maybe it was time to share some of my experiences caring for someone in the strange land of Dementia.

My Mom had Cerebral Atrophying Dementia, which is not Alzheimer’s.  If the many names confuse you, just remember that Dementia is the umbrella under which all the variations sit.  Some types have Dementia in the name, some others are Alzheimer’s, but they’re all different forms of Dementia.  So with my Mother’s, as the name suggests, her brain was shrinking, and the shrinkage left large valleys around the outside of her brain, I believe mostly in the front.  Dark gaps existed where grey matter used to hold all of her life experiences.  She was like many people in this situation, she could remember fairly clearly a few things from her childhood, but only a few.  By the time she died, at 90, practically everything else was gone; my Father, her siblings, the time we packed up everything, got on a boat and moved back to England in 1969, and then moved back six months later, a huge event in all our lives…vanished.  Long term memory was almost entirely extinguished, and in the last five or six years of her life, short term was wiped out as well. 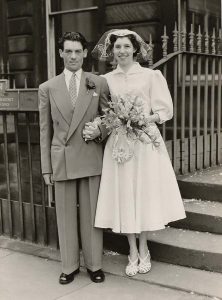 However, if I’m thankful for anything with this type, it was that, in general, her personality didn’t  change.   She was essentially still Ruth Cullen.  If you had met her, even in the last year, you would walk away probably thinking that she didn’t have dementia at all.  She would have been sitting at her table in her bedroom, looking at her view of the river, working on her jigsaw puzzles, which could have been pretty normal for many 89 year olds who didn’t have memory problems.  But if you spent the day with her…

My husband and I moved my Mom in with us in 2014.  She had been in assisted living for six years by then, and I think she hated every moment of it.  First, she was not a very social person, and I didn’t realize how much until she’d been living there for a few months.  She was a bus trip gal.  She LOVED bus trips, but she would not go on any of the bus trips they organized there.  And she had all kinds of excuses, but my favourite was, ‘Well, I worry because I have to go to the bathroom a lot.’  I would tell her ‘EVERYBODY on that bus has to go to the bathroom a lot!  They’re not going to drive for 10 hours and refuse to let you use a restroom, the driver will drown!’  But it didn’t matter.   She also didn’t like eating dinner with three other ladies because she’d have to chat with them, or she didn’t like the way they chewed their food, etc etc etc.

Before we moved her to assisted living, I was worried that since my Dad had died, being an only child, if I wasn’t over there, or calling her, she was going long periods without talking to anyone, so I felt that she would have more stimulation in assisted living, ya know, to protect her brain?  I feel some regret about that, because I think she was much happier in her own apartment.  But by that time, we had seen one or two things that were making us concerned about her memory, although I was not thinking about dementia.  Six years later, enough had happened that we felt it was time to move her in with us.  We knew this would restrict our lives, but our lives were already restricted because there was precious little ‘business’ left in the entertainment business that we were in, and so we felt it was the best thing to do. 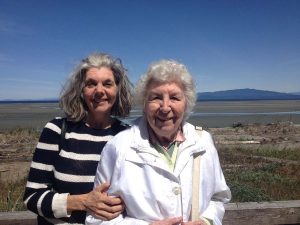 A walk by the beach

Of course, you can never be truly prepared for what’s to come.  By this time my Mom really didn’t want to go anywhere, so her days were spent in her room, doing her jigsaws, watching TV.  When she still had a properly functioning brain, she loved watching tennis and curling.  If either of those sports were on, she would refuse to go out.  Even for a fun-filled laugh riot coffee with my husband and I!  She was the one who explained curling rules to me years ago!  She never played the sport, but she and my Dad spent millions of hours watching it.

We moved her in with us in April of that year, so curling season was over.  When it started up again in late fall, I made sure to put it on for her.  She watched it for a few seconds and then with disgust in her voice spat out, ‘I don’t want to watch that!!’  I can tell you, at that moment, I just about had a stroke, an aneurysm, a heart attack and I’m pretty sure my arches fell.  When the blood finally drained away from my eyes, I said ‘What are you talking about??  This is your favourite sport!’  I didn’t know what I was going to do if I couldn’t find things on television to occupy her.  She countered, ‘There’s too much yelling!’  My only rebut for that was ‘But THAT’S curling!’

So somewhere in the months between April and November, her most beloved sporting pastime slipped away from her.  I wondered when it happened.  Did she remember Jennifer Jones one night when she went to bed, but somewhere between 3 and 4am, she rolled over and Jennifer slid away from her with the speed of a heavy end-clearing hammer?  Did she sneeze one day, and boom!  Curling? What’s curling?   And the thing that shook me the most was once it was gone, it essentially never existed.  It wasn’t like there was some feint recollection of rocks banging, brushes sweeping, the Norwegian men and their crazy pants and all that Hurrying Hard!!!  No.  It…was…gone.

However, that didn’t stop me from turning on curling whenever I could find it.  I thought if we kept watching skips in the hack eventually there might be some electrical spark that would fire up with enough gusto it could traverse her wide neural crevasse and rekindle whatever it was that she loved about it so long ago.  A futile exercise, which perhaps made me a less than kind daughter, I don’t know.  As it turned out, in the end, we were just a couple of aging women spending hours watching something neither of us could understand.  Kind of like the two old men in Sesame Street, without the hilarious heckling, but with the same amount of facial hair.

I wondered when I disappeared from her life.  I’m not sure she knew exactly who I was, and I didn’t want to ask her. It was enough for me that she knew I was the constant presence in her life, who would keep her as safe as possible, and who would, every day, make some sort of concoction that technically could be called edible food.

Two Novembers ago I was driving her to get her flu shot and every time she was in the car with me, she always said, ‘I don’t know how you know your way around.’  And I replied, ‘Well, I’ve lived her all my life, this is where I was born!’

That made me laugh. 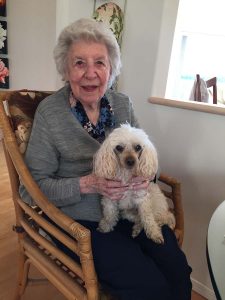 I was dog sitting. I may have just given them both a wash and set.

I realize now there are so many stories I can’t do it all in one blog, because I’m sure you have a life to live, and Christmas is coming. But I want to say this: When I was a much younger person, I think that one of the fears of so many of the parents of my fellow Baby Boomers, was that we would simply warehouse our aged parents, protecting our own lifestyle and enjoyment.  Of course at that time nobody could see the massive dementia iceberg that was heading our way.  But that did not happen.  There are so many out there doing the same thing I did, and probably a lot better in even more difficult circumstances.  And I just want to say to all of you, that I see you and know how hard you are working to protect your loved ones, and understand the toll it can take on your heart and mind.  I send you strength and my everlasting admiration.